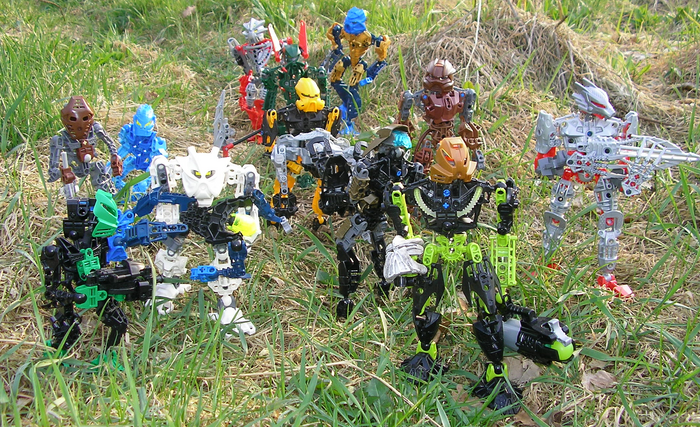 The Patriots were an elite Toa team on the island of Balfe Nui in the Remains Alternate Universe who dedicated themselves to stop Nuva by any means necessary.

The Patriots were founded by Lanudos as an elite task force to put and end to the threat of Nuva. He recruited a team of four elite Toa who were the original protectors of the City of Rhagard.
Lanudos assigned Solunos to take command and find a way to stop Nuva by any means. He also tasked the team to find and retrieve the Kanohi Tilira to reawaken the ancient spirit as aid in their battle.

They established the Patriots' Camp as their base of operations.

The four members of the team recruited the survivors at the Farside Village into their ranks and Solunos retrieved the Kanohi Tilira from their former home. They equipped them with improved armor against the Forgotten Warriors. To further strengthen their numbers, they set up a beacon for others to send distress letters to.
The plan however hardly worked as they experienced pretty much as many losses as new members. In the end, their numbers didn't much increase after their initial rectuitment.

After most of the team's original members fell in the Battle at the Sacred Grove, only Solunos remained as the last directly instructed by Lanudos. While his teammates were in battle and recruiting, he both resurrected Tilira and found a way to nullify Nuva's powers by altering all of the populations's biomechanical structure.
When Solunos suggested his plan to Theran, the two disagreed over the morality of that action and ultimately a fight broke out between the two. In the end, Theran killed Solunos, and thus ended the Patriots group.

The elite of the Patriots developed a standardized frame of armor. These were crafted to withstand the hazardous blades of Forgotten Warriors in particular, rendering the wearer of this armor unable to be infected by attacks of Forgotten Warriors. This didn't grant them complete immunity, however, as they could still directly be infected by Nuva's infection launcher.

Retrieved from "https://custombionicle.fandom.com/wiki/Patriots_(Group)?oldid=532378"
Community content is available under CC-BY-SA unless otherwise noted.