The Farside Village acted as the seat of the Farside Council on the island of Balfe Nui. After being rebuild it became the most influential of the four settlements.

The Farside Village was founded by the original Farside Council consisting of Hakefor, Leshar and Balenvar who unknowingly constructed the settlement upon the burial grounds of the Kanohi Tilira. The mask had shaped the land above it and with the dry and sturdy soil it created made for an excellent building site for huts and walls.
In its early years, the village was populated only by a few Matoran. Additionally to its Council the Farside Village had two trained guards as their protectors, namely Vorred and Jorag.

Months later, the ancient spirit of Nuva was reawakened. Due to the village's remote collection, its inhabitants and leaders weren't aware of the Forgotten Warrior outbreak. Thus, when the two strangers Theran and Range arrived armed at their gates, they were distrusted when they told of strangely undying creatures roaming the nearby fields.
Their warnings proved to be true as the village was attacked at nightfall, forcing every inhabitant to flee as the Forgotten Warriors took over. During the night, the invaders located and dug up the ancient Kanohi mask that was buried beneath the grounds, achieving the goal that lead them there in the first place.
The defeat didn't last for long, though. The morning after the initial battle the Council launched a counter-attack and successfully destroyed the Forgotten Warriors within the village. The Kanohi Tilira fell into their hands and was given to Xafri.

When the Protosteel Construct was unleashed and headed towards the village, Xafri used the mask and sacrificed her life force to defeat the incoming threat. While successful, the mask also drained two others of their life force who were in too close proximity.
With most of the survivors being recruited into the ranks of the Patriots, Balenvar and Jorag stayed behind to guard their home and wait for the others to return.

It is unknown what happened in the following weeks, but both of the Toa were found deceased and the village overgrown when Range and his group made their way back to the village to retrieve Dorvan's mask. The former Forgotten Warrior Amarii and the fusion Sorol seemed to have made their home in the ruins since, and when they left the site to join in the Battle of Rhagard, the Farside Village was abandoned.

After the defeat of Nuva and the destruction of Rhagard, many of the city's former inhabitants moved to the abandoned village and, in the following months and years, rebuild the small village into the most important settlement of the island, with many more Matoran residing there than ever before. The Farside Council was reformed and the village prospered ever since.

The Farside Crypt was later constructed near the village to keep the armors and tools of the fallen and to remember these heroes of old. 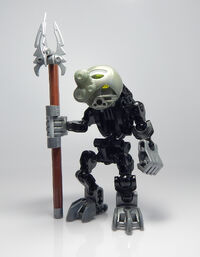 Turaga Berwak, formerly the last Toa of Rhagard, was a Turaga of Earth and leader of the Farside Council. He carried a great Kanohi Akaku and Turaga staff of office which was based on his Toa tool. His armor was in the traditional elemental earth color, with a black armor and silver accents.
Toa Berwak used to be a Toa Hagah and personal guard of Makuta Lanudos, until the Makuta Rebellion when the team sealed him away. He served as Rhagard's protector for many years to follow, until he eventually fulfilled his destiny as he saved Aescela's life using up his remaining Toa powers.

With the Farside Village being rebuild and the Farside Council reformed, he became the leader of the Council and the new central settlement of the island. 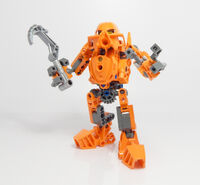 Councilor Grentar, former right hand to Lorani, was a Su-Matoran and member of the Farside Council. The Matoran carried a powerless noble Kanohi Kakama and, upon becoming Councilor, received a newly forged axe as his badge of office, replacing his hook. His armor had a traditional Su-Matoran orange coloration, though it lacked the additional commononly seen white details.
Grentar was voted to represent the Matoran that formerly inhabited Rhagard as he proved himself competent as an acting leader of the city. 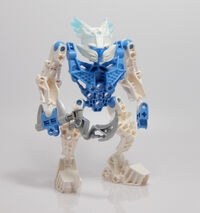 Iselia was an Agori of Ice and took up residence in the village upon being voted Councilor. She serves as the representative of Lorani and the Agori of Eternaset Fortress on the council.
Upon gaining her rank, she adapted an all-white elite armor, with icy light-blue accents to highlight her elemental heritage. Additionally, she wielded twin staffblades which were specifically made for her as a badge of office. 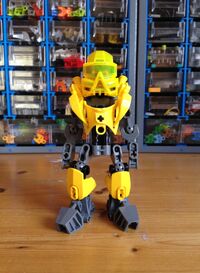 Valkazem was an Av-Matoran and councilor of the Farside Village. During the conflict of Nuva's resurgence, he successfully lead a number of Matoran from his doomed home village to safety. After the Battle of Rhagard was won, Valkazem joined forces with the survivors and helped rebuild the Farside Village in the following years and months. Due to his proven leadership skills during the crisis he was voted to represent his fellow Matoran on the Farside Council.
Being elevated into his new rank Valkazem received an elite suit of armor, which matched the yellow of his Kanohi Kaukau. He additionally detailed part of his armor in light teal, using his elemental light powers. Valkazem received a unique staff as a badge of office. 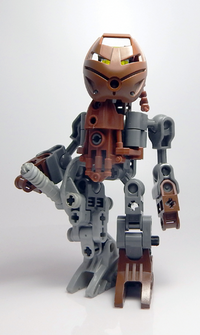 Aescela: Hero of Rhagard, Vanquisher of Nuva and Liberator of Balfe Nui - if one were to note down all the titles give to the modest Av-Matoran after the Battle of Rhagard. As a former resident of the original Farside Village, Aescela accompanied Theran and his team during their long way to the final confrontation with the ancient being Nuva. When all hope was lost during the final Battle at Rhagard she managed to muster up the courage needed to make one final push - and managed to destroy Nuva forever with the help of Ridor and Pauto.
Using her elemental light powers, Aescela altered her armor's appearance to be of a reddish brown color. One of her legs was cut by one of the Forgotten Warriors attacking the Farside village, which then had to be amputated in order to stop the Forgotten Warrior virus from taking her over. It was later replaced by a mechanical leg by Lanudos, who also replaced her original Kanohi Pakari with a Kanohi Ruru when the former was lost. Aescela still carries the blade she used to destroy Nuva at Rhagard. 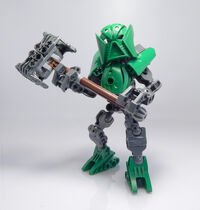 The Le-Matoran Ridor was a former guardsman of the city of Rhagard. He played a key role in the final moments of the Battle of Rhagard when he, along with Pauto and Aescela, launched one final attack against Nuva. With his help Aescela was able to destroy the ancient being for good. With the destruction of Rhagard during the battle, many of its former inhabitants relocated. Ridor helped with the reconstruction of the Farside Village, but left soon afterwards for a few years seeking adventure. He later returned with his treasures and tales to the rebuild settlement.
Upon returning to the Farside Village Ridor received an elite set of armor, which matched the green color scheme he preferred. Additionally, he got a unique double-sided hammer as a replacement for his old guard spear. 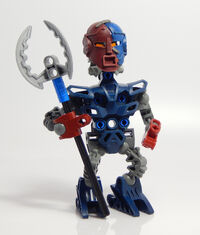 The most striking feature of the Ta-Matoran Pauto was his mask - a dark red noble Mahiki which had a third of its structure broken off and replaced by dark blue elements of the same mask type. To this day it is unknown what originally broke his mask or why he never replaced it since.
Pauto also served as a guard to Rhagard alongside Ridor, until they were cast out of the city by Nuva. He helped Aescela when she proposed a final but desperate strike at Nuva when the Battle of Rhagard seemed lost. When the ancient spirit of Nuva was finally destroyed, the Ta-Matoran helped to rebuild the Farside Village and eventually settled here. He accompanied Ridor on his adventures through the uncharted regions of the island for a time. Upon returning he brought with him intricate blueprints for weapons and armor he found on his journeys, becoming the master smith of the village.

Pauto upgraded his own armor after setting up his smithy, keeping its design close to his mask. While his armor is mostly of a dark red representing his element, his left arm shares the dark blue color features a third of his mask has. He also crafted himself a tool he called the Meterium Shovel, replacing his double-bladed guard spear. 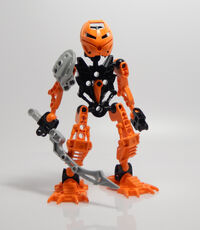 The Su-Matoran Vamat was a former resident of Rhagard. He was aware of Makuta Lanudos' experiments on Av-Matoran, and when Kyhae inquired about the whereabouts of Glonor, he informed her about what possibly happened.
Vamat was later exiled from Rhagard alongside most of the other residents. He didn't partake in the Battle of Rhagard as he stayed behind following Lorani should the battle be lost.
Vamat later helped rebuild the Farside Village and settled here. As the other Matoran he received a unified armor later on. His was colored in the usual Su-Matoran color of orange, with white accents on his shoulder, while is noble Kanohi Ruru retained the base color. He upgraded his old blade and since carried an all-white sword. 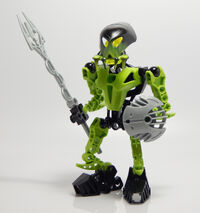 The Matoran Prenu was one of the more rare Kra-Matoran, having her light drained. Nobody - not even she herself - remembers how this happened, but her nature and manner has been cold and more calculating ever since. Unlike others of her species, however, she was not completely unfit for the Matoran societies of Balfe Nui and still had a degree of care for her people. She lived in Rhagard for most of the life she knows of, eventually having raised in rank and becoming one of Lorani's personal guards.
Much later, when the destroyed Exonme was brought into Rhagard and repaired, the machine attacked everything in sight, nearly sealing the fate of Prenu as well if it wasn't for Nuva's intervention. Still, like most of the other Matoran, she was exiled from the city.
With the Battle at Rhagard being won, Prenu left the city of Rhagard for good and helped to rebuild the Farside Village, settling there.
Upon her change from an Av-Matoran to a Kra-Matoran her armor changed to be mostly black, only retaining a few details in her former chosen coloration, being light green. Like the other Matoran she received a unified armor when the new Farside Village had been completed. Prenu still carries her old arms and mask, a trident and a small shield alongside her noble Kanohi Shelek. Her gear has been slightly modified over time.

Retrieved from "https://custombionicle.fandom.com/wiki/Farside_Village?oldid=531648"
Community content is available under CC-BY-SA unless otherwise noted.