Custom BIONICLE Wiki
Register
Don't have an account?
Sign In
Advertisement
in: User:Windfall the wanderer, Characters, Toa,
and 3 more

Aeza was a female Po-Matoran who later became a Toa of Stone.

As a Matoran, Aeza lived in a village with a small population of other female Po-Matoran in the Southern Island Chains. While there, she took up a profession of carving. Her products weren't consideredthe most finely crafted, but they were all very unique and intriguing, and this earned her a steady business, and many friendships.

However, she became bored after several years of toiling in this manner, so she abandoned her village, and set about wandering.

She eventually ended up on the Southern Continent, settling in the dusty wastelands inhabited mostly by Po-Matoran raiders. She lived under harsh conditions, and was constantly subject to raids.

At one point, Aeza was kidnapped by a band of raiders. After being brought back to their base, she ended up being brought to their leader. After doing so, she challenged the leader to a duel for her freedom.

The leader, surprised by the audacious offer, and confident in his abilities, accepted. However, Aeza ended up killing him. Despite her inital deal being for her freedom, she decided to take up leadership of the tribe of raiders, and as such, adopted their lifestyle

Shortly after, while wandering in the nearby mountains, she encountered a Toa of Ice named Kielor, who had recently had his faith in being a Toa restored, met and talked with Aeza for some time. Despite their conflicting personalities, both of them enjoyed the talk and parted ways as friends. 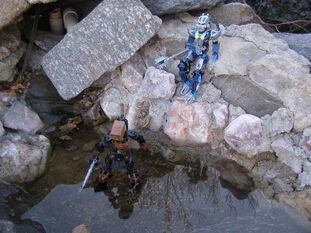 At one point, Aeza conducted a raid on an abandoned tomb, unearthing a valuable protodermis sword.

At an unknown point in history, Aeza was contacted by a Toa of Water named Mareela, offering a place in a Toa team and advanced training. Aeza initially declined, but later accepted.

Aeza loves to take risks and have adventures and is a restless spirit. She enjoys the thrill of danger, and loves going new places and trying unfamiliar things, and is in general very bold.  She can, however, sometimes be very aggressively pushy when she wants something. In addition, she likes having a feeling of authority. She is also a very free spirit, and despite her outward appearance, is actually quite a deep thinker at times. Years of living with the Po-Matoran raiders have made her wild, almost bestial.

As a Toa of Stone, Aeza had near-perfect command over stone. As such, at a basic level, she could create, control, and absorb rocks. Examples of this included creating boulders, starting and stopping rockslides at will, and sensing stress points in stones.

As a Matoran, Aeza had innate elemental stone powers, which manifested as a great physical strength. When she became a Toa, she gained full access to and control over her Stone powers.

Aeza carries a crude pair of half shields, and was one of the first Toa to use such a unique weapon.

Community content is available under CC-BY-SA unless otherwise noted.